British Columbia, Vancouver, and Nanaimo are all famed for their stunning array of wildlife. Set in this picturesque landscape it is yours to explore and enjoy whilst on a yachting holiday with us here at Nanaimo. From statuesque mammals to impressive birds of prey, fascinating marine life and graceful forest creatures – animal lovers are sure to have a whale of a time (excuse the pun!) on a Nanaimo yachting trip. In this article, we will have a look at our top three native land animals in a little more detail.

The island of Vancouver is the home of black bears, as well as their better-known relatives; the grizzly bear. The black bear is the smallest of the three species of bear typically found in North America and it is the only one that can solely be found in the North here. Their most distinctive feature is their short claws – which are unretractable meaning they are excellent climbers! Despite their name, black bears aren’t all black! They have a gorgeous brown muzzle and many have lighter coloured markings on their chests. Where exactly they live depends on their colouring, here in the West of North America they are typically browner, sometimes even a cinnamon style colour, and rarer still, blonde! In the East they are more typically black as their name indicates. In British Columbia though we have our own special species of black bear known as the Kermode (glacier) bear, and these are black bears with transversely bluish white fur and they are only found here.

Black bears are omnivorous just like us. They sustain themselves on a diet composed of things such as plants, small mammals, honey (yes bears do really love honey!), insects, fruit, and like their Grizzly brown cousins… salmon. It is also known that black bears will tackle a somewhat larger meal such as a young deer or perhaps a moose calf but this is a rare occurrence. In the whole of North America there are around 600,000 black bears, and about half of those reside the Canadian side of the border. Their Louisiana and Florida relatives however are struggling with numbers and thus are listed as a threatened species with numbers around the 3,000 mark. Black bears can actually be found as low down as Mexico, and across 40 states in the United States of America. Populations have been pushed back by human development and now numbers are strongest in the remotest places meaning in BC we have a plentiful population of our own strain of the species. Intensive farming has been the most destructive force in depleting the bear’s original habitat.

In terms of their nature, black bears are extremely adaptable creatures – hence why the human challenges that have been thrown their way over the years haven’t massively affected populations like some other species. They can live almost anywhere, but are most commonly found in heavily forested areas which is what you would expect. In this kind of habitat the bears have access to more plant life, bugs, as well as fruit and nuts which means it is easier for them to keep their strength up and reproduce. They can however, also be found in the tundra, where they can be seen foraging in fields and meadows. They are also animals who like their own company. Apart from a mother and her cubs, black bears tend to live an isolated existence and don’t like to socialise with their own kind unless there is some good grub on offer. Up here in BC black bears hibernate during the winter months, and so if you are hoping to spot one definitely make your Nanaimo yacht charter visit in the summer. Down where the winters are warmer, black bears don’t necessarily hibernate or if they do it is for a much briefer period than their northern brothers. Mother bears tend to build dens and stay there during the coldest time periods, but single ladies and males are more likely to branch out even if it is hibernation time. Mother bears reproduce every other year and tend to mate in the summer to create up to 6 cubs who will stay with her for up to two years. 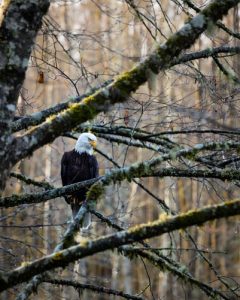 This majestic creature is most commonly found on Vancouver Island. They really are a treat to watch and can be seen quite readily. The Bald Eagle weighs up to 4kg if it is a male, and up to 7kg for females. They can live for 40 years which means they are a robust species and they get to see a lot. A fascinating fact which demonstrates their incredible nature is that if a bald eagle loses a feather on one side of its body, it will shed one on the other side to ensure that it is completely balanced at all times – genius! By far the most impressive thing about these winged beasts is their eyesight. They can see seven times further than humans – meaning they will always spot you before you spot them – long before. Luckily, they are not shy creatures when on the hunt and so sightings are incredibly common, and there is no better feeling than relaxing upon one of our yachts and witnessing this regal bird swoop down and catch its dinner.

Like the black bear, the bald eagle doesn’t really live up to its name – in that it isn’t bald at all! The name comes from the word ‘piebald’ which means patchy or spotty. The birds are almost exclusively dark brown with white feathers on their tails and heads. They are born a greyish hue, and develop their brown colouring at around 12 weeks old which is the same time they leave the nest. The white doesn’t tend to appear until around their 4th birthday (if they make it their as only 50 per cent get past the first year of life) meaning the young ones are easy to spot. Their hooked yellow beaks are their most distinctive physical feature, and they are also famed for their large talons and expansive feet. Their feet are armed with tiny little spikes known as spicules. Both the beak and clawed feet teamed with their keen eyesight mean the creatures are mean fishers, and so if fishing on board one of our yachts it is a good plan to follow the mighty bald eagle’s lead.

The bald eagle likes to set up camp in the forest too just like the black bear, and they also like to be close to large bodies of water so that they can have the best of both worlds; a cosy nest as well as ample prey. Although they aren’t shy when it comes to hunting, they do like their homes to be further from human activity. They are also exclusive to North America, and as they sit at the top of the food chain, they population is reasonably stable. It is only when their habitat is destroyed by humans that they struggle. It is Canada’s biggest bird of prey, and it’s preferred dinner option is always fish. Should fish not be an option for whatever reason, it will instead choose to dine on rabbits, smaller birds, young deer, or squirrels. They are very loyal creatures, shown by the fact that they mate for life. Mating is instigated by an impressive aerial display by the males which is common in the bird kingdom. The heaviest population of the bird is found on the Pacific coast of BC but they are found right across America. 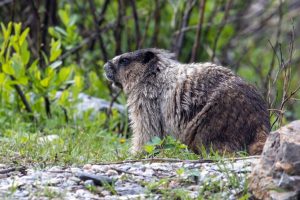 The Marmot is a lot less well known than the bald eagle or the black bear, but it is no less awe-worthy. It is a big burrowing rodent that is related to the squirrel family. Unlike many rodents the marmot is diurnal (sleeps during the night time and is awake during the day time). There are 13 species of marmot in total, of those thirteen, four reside in Canada. There is the woodchuck marmot, the hoary marmot, the Vancouver marmot, and the yellow-bellied marmot. Both types are rounded and beefy ranging from 2-9kg. Their fur is short and they have bushy tails and relatively tiny ears – making them absolutely adorable to look at. They like to live in areas plush with grass and greenery, but also the rocky slops of mountains and the lowlands. The yellow-bellied marmot, the Vancouver marmot, and the hoary marmot are only found over here in the west. The woodchuck marmot which is more commonly known as a groundhog don’t really have a single area of inhabitancy, and are somewhat scattered across the whole of Canada. The Vancouver marmot is only found on Vancouver Island – finally an animal that lives up to its name!

These cuties tend to eat mostly green plants and they can be a bit mischievous and start to harvest their lunches from human vegetable patches and gardens. Like many rodents, they have quite an impressive voice box, and signal to each other through a series of dense high pitched squeaks. Unlike the bears, they are very much bothered how much sleep they get and they can hibernate in burrows for up to nine months of the year! This is why they must put on so much weight in their waking months as they lose almost half of their weight during this long hibernation period. Groundhog Day (February the 2nd) is so called, as it is a celebration of these little creatures emerging from their long luxurious slumber.

Marmots mate soon after waking from their long naps, and usually bear anywhere between two and nine young. They are typically silvery grey in colour with a brown bottom and a lighter coloured stomach. Their defining feature is the black and white marks they host on their heads and shoulders. The Vancouver marmot lives in the mountains, and it is significantly larger than its other Canadian cousins. This species is also subject to a number of captive breeding programmes across Vancouver Island and Canada more widely. This is because it was under threat of extinction in the 1990s, the recovery programme has been largely successful with numbers in the wild increasing tenfold between 2003 and 2015. The main cause of the decline was habitat loss caused by human activity, but humans are righting that wrong too with these conservation efforts.

So there you have it! Our top three creatures to keep your eyes peeled for whilst yachting with us in the beautiful Nanaimo.