YOUR START TO A GREAT CRUISING VACATION 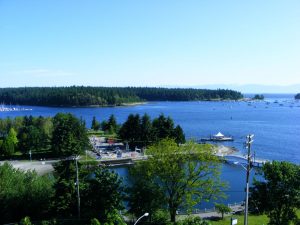 Nanaimo is located on the unceded land of the Snuneymuxw First Nation (pronounced Snuh-NAY-mow) It is Vancouver Island’s second largest city and  known as the Harbour City for its picturesque harbour. It is also the most northerly destination in the Gulf Islands and it’s easily accessible location  makes it an excellent base for travel north or south.  It is a transport hub of significant importance for Vancouver Island  with a domestic airport, helijet and 2 sea plane terminals (20 minute flight to the mainland) as well as the BC ferries terminals (carrying both cars and passengers with 6 sailings a day) for travel from Departure Bay Horseshoe Bay and from Duke Point to  Tsawwassen (which takes you to the closest terminal to the Vancouver International Airport and the Canadian/US border crossing at the Peace Arch)

Nanaimo, meaning the  “great and mighty people” in the language of the Snuneymuxw people welcomes travelers from afar. Cosmopolitan, yet affordable, this is the ideal city to caste off a sailing adventure. Enjoy the sunset and local fare at a neighborhood restaurant on your preboard night.

The city is supported with 2 excellent chandlery stores which can handle almost anything marine.  Stones Boatyard on Stones Marina has the largest travel lift on the central island and together with the on site Marine Store and a team of service and inflatable marine technicians will ensure yoyr boating troubles are kept to a minimum.

Visit downtown Nanaimo;  At its heart, the Nanaimo Museum displays exhibits on the city’s industries and indigenous peoples. Near the Harbourfront Walkway, the Bastion is an 1853 wooden tower with cannon firings in summer. Shops and cafes fill the Old City Quarter. Offshore, on Saysutshun Island, trails lead to beaches and is steeped in First Nations history and culture.

If you wish to be at a Marina for your last night, the Nanaimo Port Authority city marina has fuel and power and there is also a pump out station at the entrance to the inner harbour.  Shops, restaurants and cafes abound along the waterfront.

Nanaimo is the closest point to the Sunshine Coast cruising area and the incomparable Princess Louisa National Park.