The Arctic Ocean is of great importance to us here at Nanaimo, as it is linked with the North Pacific which we enjoy daily, via the Bering Sea. So, we wanted to take some time to look at one of the greatest challenges the Arctic is facing at the moment; plastic.

Now this of course, is not a new problem. But it is one that is becoming increasingly pressing, and increasingly widespread. In September, a research team from Exeter University in England, found that plastic is polluting even the most remote ice flows of the Arctic.

The Arctic Mission party discovered blocks of polystyrene in areas of ocean covering hundreds of kilometres, which was recently covered by ice all years around. Take a moment to let that image sink in. This unfathomable find was merely 1000 miles from the north pole. Once where ice dominated, now the highly irritating and environmentally cataclysmic poly-plastic stands. Incomprehensible. Plastic is so threatening to the oceans ecosystem because it breaks down into microplastics which are ingested by creatures large and small, which we as humans then eat. This plastic catastrophe is literally affecting every living organism in the world.

As consumers, we have the power to change this destructive plastic pattern that is affecting our oceans. As an example, the annual consumption of plastic bottles is projected to top half a trillion by 2021. This rate of growth is far outstripping the rate of recycling, which too has increased, but not by nearly enough. A million plastic bottles are purchased around the world every minute. We can demand more environmentally friendly alternatives to stop our oceans becoming a plastic wasteland.

There is now enough plastic in the ocean to form a permanent layer in the fossil records. What a mark to leave on the world. Humans produce a staggering 300 million tons of plastic a year, which is around the same weight as all the people on the planet. The biggest problem with plastic is, its single use nature. People are warming to the ideals of reduce, reuse, and recycle, but when it comes to plastic, we as a species are particularly bad at following through with this.

The expedition was the first voyage into the North Pole by yacht. It was only possible due to the dramatic reduction in ice cover now over the summer months which has been caused by climate change. There is a little irony there I think. Due to climate change, we can go deeper into the Arctic than ever before to learn about the effects of climate change. 40 percent of the Arctic is now navigable in the summer. The researchers were overwhelmed by the amount of rubbish they found, and the resultant effect on the Arctic wildlife. 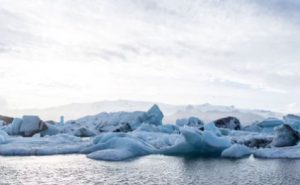 The layer of sea ice that used to be, protected wildlife from the incoming plastics and pollutants, and so now that the ice pack is depleted, so too is the quality of life for the areas inhabitants.

With the ice giving way, the trash isn’t the only threat. Commercial fishing, shipping, and industry entering the area brings all kinds of new threats to the ecosystem and its wildlife too.

Samples were gleaned from the ocean to allow the team to analyse the saturation of microplastics to further investigate the impact on the environment there. The best working estimate is that there are 5 trillion pieces of plastic floating in the world’s oceans, meaning that soon, if action isn’t taken, there will be more plastic in the waters than fish. Much of this plastic is carried to the belly of the oceans via rivers and streams, but what is equally concerning now is that the plastic has been trapped in the ice, which is now melting and re-polluting the ocean with microplastics.

The Arctic is a hotspot for this, due to the number of rivers that empty out into the Arctic basin. Yet the data on this is few and far between which is what spurred the mission. Plastic isn’t the only concern. The team is also investigating noise pollution, in particular, man-made noise pollution. Arctic marine life and mammals are particularly sensitive to sounds so it is important to understand how man-made sounds travel through the Arctic seas and how this relates to the degradation of the ice pack. Researchers say it is about understanding the soundscape of the summer arctic and the changes in that.

Projections indicate that the Arctic may be ice free by the summer of 2050. Although this will give way to more research led expeditions, it will at that point, probably be causing irreversible damage to our ecosystems.

A frightening prospect to say the least. Here at Nanaimo Yacht Charters we are keen to promote environmentally conscious boating and holidaying, to play our part in protection the waters that give us so much joy and pleasure.