Sailing Miscellany – The many uses of a Buoy! 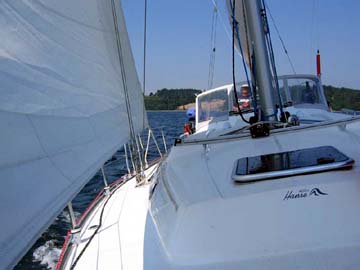 If you are on a bareboat yacht charter here with us on Vancouver island, or doing a yacht course with our sailing school, you will come across many buoys out on the water. In Canada, we use the international buoyage system since 1983. What is so interesting about buoys is that there are so many uses for buoys within the sailing world, from the obscure to the common place, so let’s look at the many uses that the buoy is used for, and how many you are likely to come across on a bareboat yacht charter.

The most common use for buoys that you will see out on a bareboat yacht charter, is to help with navigation. They are used to mark out channels and passages for you to use, often named ‘Fairway Buoys’; as well as hazards and points that you need to avoid, they are in fact an indispensable aid for pilotage at sea, be it on a bareboat yacht charter or for big passenger ferries or indeed boats carrying cargo.Often buoys will have a bell attached to keep you aware of something that needs avoiding.

Buoys also come into their own as life saving aids too and are used in a number of ways. A lifebuoy can be used to be thrown overboard in a man overboard situation, as well as the DANbuoy which has flags, lights and GPS activation and has proven itself in saving lives, by making it easier to mark the position of a man overboard.

Not something that you will come across hopefully on an ordinary bareboat yacht charter, but buoys are also used in defending waters in warfare situations. Used by anti-submarine aircraft, SONObuoys in the water can detect enemy presence using SONAR.

Something that you will most likely come across a bareboat yacht charter are various ways buoys are used to mark out recreational activities, such as, shot buoys for marking out dive sites. Also it is essential when you are doing any diving anywhere to always mark out your positions using a diving buoy, which gives other uses of the water an exact idea of your position under the water. If yacht racing is your recreational pursuit, then of course you will be well used to seeing buoys out on the water, marking out the points of the race course.

Mooring buoys are brilliant for allowing yachtsmen to anchor out safely at sea, especially if you are planning on leaving your yacht whilst you do some exploring ashore. There are numerous mooring buoys to be found throughout the cruising grounds of The Gulf Islands, San Juan Islands, Sunshine Coast and Desolation Sound.

Amazingly we even rely on buoys to give us readings on the weather and the water conditions.

Weather buoys are used to monitor wind directions and speeds, as well as air temperatures. There are also Tsunami buoys used in tsunami warning systems, which can detect sudden changes of water pressure under the water giving alarm where necessary. A profiling buoy is used at sea and can detect sea temperatures and salinity, as well as some buoys that can measure wave heights and strengths.

So when you are next out on a bareboat yacht charter, look out for the unassuming buoy and marvel at quite how many fascinating tasks that the buoy can perform!