On a Vancouver bareboat charter another island to explore in the Southern Gulf Islands would be Valdes Island, with its towering sandstone cliffs it is an impressive island to visit. 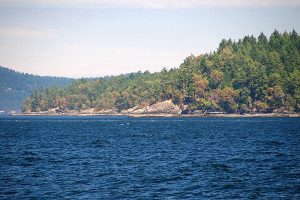 Where is Valdes Island?

Valdes Island is another of the Southern Gulf islands, found in the Strait of Georgia and sandwiched between Gabriola Island and Galiano Island around 25 miles southeast of Vancouver and it is a lovely place to stop by on your Vancouver bareboat charter to appreciate both the quiet and untouched environment of this beautiful island. There is no ferry service to Valdes Island, access is only by boat or seaplane and thus it is a very quiet spot.

The island itself is named after the Spanish naval office Cayetano Valdez y Bazan who first visited the island in 1792 when he was serving as a lieutenant on the ship Descubierta, he then returned again when he was captain of the Mexicana and explored the area along with Captain Galiano on board the Sutil (hence the names of both of these southern gulf islands!)

The island itself is very small and covers an area of just 9 square miles, being just 1 mile wide and only 10 miles long. The island appears inhospitable due to the being surrounded by steep cliffs and deep water, aside from a short stretch of beach at the southern end near Porlier Pass.

The island has no water or electrical supply and the roads are restricted to forestry logging roads only, in spite of this the island does support a very small community of residents on the north shore in Starvation Bay, but the main population consists of vacationers coming to enjoy the peace and tranquility.

What to do on Valdes Island

There is a First Nations Reserve for the Lyackson First Nation, which is a small Salish community, at Shingle Point which covers around a third of the island. The island has around 60 sacred and protected archaeological sites and burial grounds, some of which date back around 5,000 years, which all visitors are asked to respect.

Wakes Cove is a Provincial Park on the island and is well worth a visit on your Vancouver bareboat charter, this 205 hectare park in the coastal Douglas fir ecosystem and protects a mixture of old Douglas firs, Garry oaks and arbutus trees, as well as being home to some endangered plant species. As well as offering numerous hiking trails and a protected anchorage it is a perfect place for some wildlife viewing and some great kayaking.

The Sandstone Galleries up on the north shore of the island are also well worth a visit from your Vancouver bareboat charter, with some spectacular sandstone formations carved over thousands of years to view.

Kayaking opportunities on Valdes island abound, and not only do you get to admire the impressive sandstone formations up close, it is also a great way of exploring some of the coastline.
If you fancy doing some Scuba Diving then there is abundant sea life to see, with large ling cod swimming amongst the colourful sea urchins, was well as Puget Sound king crab to admire hiding amongst the rock formations.

So another must visit place on your Vancouver bareboat charter!