Holidays in Vancouver – Cycling and Sailing?

At Nanaimo Yacht Charters we often have people splitting their holiday between a yacht charter to enjoy the beautiful nature and the peace and quiet and some time in wonderful Vancouver. The most popular way of travelling for tourists and locals is by bike.

Vancouver is a fantastic place to get on your bike! The City of Vancouver have invested in over 450 km of bike routes comprising of bike paths and bike lanes on the roads. Investment is as a result of the Greenest City 2020 Action Plan. This plan was a visionary document to make Vancouver a global leader in urban sustainability. Amazingly, commuting by bicycle now makes up 10% of all trips.

There are all terrains from the flat areas of Stanley Park to mountain biking on the North Shore.

If you’re new to Vancouver and don’t like to plan, then you can simply get on a bike (with your helmet) and cycle. If you’re going outside of the downtown area  you may want to have a look at the City of Vancouver’s Bicycle Route Map & Guide. The map can be downloaded or picked up from a list of locations.  The website also provides information about road regulations and safety tips.

Many visitors head for the cobblestone streets of the oldest neighbourhood, Gastown. The area is a great place for food, fashion, coffee and people watching. Another popular area is the Chinatown and then on to Mount Pleasant, home of craft beer tasting rooms and boutique shopping.

The most famous bike routes in Vancouver is the paved pathway along the Stanley Park Seawall. It’s well sign posted and is fairly flat. If you’re looking for something more adventurous then north of downtown Vancouver is the North Shore which is known for challenging mountain bike trails; Mount Fromme, Cypress Mountain and Mount Seymour all have great trails which are well signed and established.

There are plenty of places to hire bikes around Stanley Park – mountain bikes, tandems, hybrids, mountain bikes and even electric bikes for those wanting to be on a bike but not have to push up the hills. There are rental places in Denman Street between Davie and West Georgia streets.

The City of Vancouver have also launched a public bike share system called Mobi which has pick up/drop off stations all around the downtown area.

If you are a tourist, you mustn’t leave Vancouver without walking or cycling along the Stanley Park Seawall. It’s 6 miles and gives you a loop of the entire park. As you cycle enjoy the views of the North Shore mountains and Lions Gate Bridge. If you prefer to cycle off the pavement then instead of doing the paved circle go across the middle of the park. Look out for the rose garden, the rowing club and the lost lagoon.

Watch out for hikers and joggers. 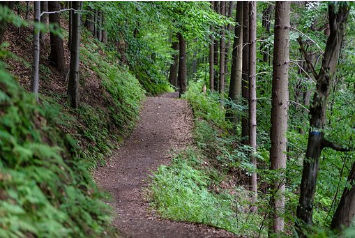 If mountain biking is already a hobby, or something you’d just like to have a go at then Vancouver North Shore is a wonderful place to start. North shore has trails with terrain to challenge the most experienced rider – logs, boulders and some man-made challenges just to add to the fun. There are also though many introductory trails. There are several organisations such as Trail Forks who provide a huge amount of information about all the various trails, however if you are a tourist and have a small window of time then you may want to book a guided mountain biking trip with a company like Into the Wild.

Some of the most well-known trails are:

Stupid Grouse Trail (Cypress Mountain) – This is classed as easy to moderate. It has dips and natural obstacles and some faster sections, but is great for beginners. The BLT and Family Guy trails are in the same category.

Pipeline (Mount Fromme) – In the mountain biking fraternity this is classed as moderate to difficult. This trail is very well maintained.  Other trails in the same category are the Seventh Trail and the Upper Oil Can.

Boogieman (Mount Seymour) – This trail is for advanced, experienced riders with rock faces and the like to contend with. Other similar trails are Ned’s Atomic Dust Bin and Bridal Path. If you’re not able to take part it may be fun to go and watch other riders. 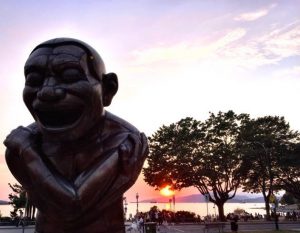 This route gives a lovely mix of beaches and urban waterfront areas. Start at Sunset Beach on the English Bay and follow the path which circles False Creek. Here you will be cycling past Science World and Vancouver Maritime Museum. For lunch a popular detour is to Granville Island to wander through the waterfront restaurants and experience the Granville Island Public Market. The ride ends at Kitsilano beach, where there is an outdoor saltwater pool with views across the city. 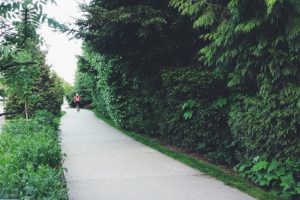 This 15 mile route takes you from downtown Vancouver through some of the historic shopping districts and into the countryside. The route begins at Science World on False Creek, follows the road through to Commercial Drive and onto Trout Lake and then onto Burnaby Lake. At the end of the route you will be in New Westminster Quay. A great place to stop for lunch or supper. 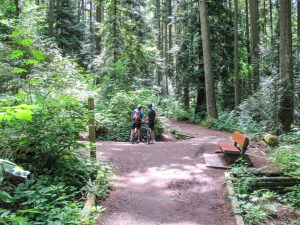 Start cycling on the path from Jericho Beach. The path hugs the coast, past Spanish Banks park and then on round to cycle past the University.  The campus also has the Museum of Anthropology which is well worth a visit, the Botanical Garden, Greenheart Treewalk and Nitobe Memorial Garden. The last part of the cycle route is at Pacific Spirit Regional Park ending with cycling through the forest.

So a week sailing and then a week discovering Vancouver by bike? Sounds good to me!