Fishing while you cruise – our first attempt! 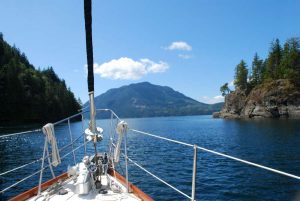 As some folks may know, before immigrating to Canada, we built a 40’ Endurance Ketch called “Baraka” which became our home at sea for 10 years…..

An excerpt from the book (in progress) “Are we East or West of the Equator?” – by Ian MacPherson!

Hopefully your fishing while chartering along our spectacular coast will be far more peaceful!…………. 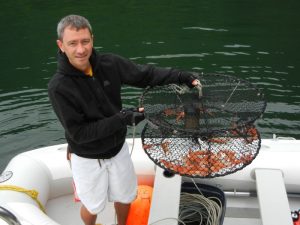 ‘This was an important activity on board, one that broke the monotony of the day. To achieve this, we were armed with a large Penn Senator fishing reel onto which was wound 1000 ft of 200lb test braided nylon ending with a 40 ft wire trace and one of my famous handmade lures. (from the aluminium bladder of a cardboard wine box!)

This was all handily mounted solidly on to the top rail of the pushpit. To say that this lacked finesse was the understatement of the day. When we set off on our trip to sail the world Shari and I had never fished a day in our collective lives. Clueless was the second understatement worth noting. Despite this minor issue we proceeded to fish!

Our first fish was announced by the snarling ratchet of the reel as a fish stripped off a couple of hundred feet of line. This foreign sound filled me with the excitement of the catch but terrified the ship’s cat, who scurried deep into the depths of the forepeak. However, it did bring out my fan base of our two daughters, Eleanor, aged two and a bit and Katie just one year younger and lastly of course my chief fishing advisor, Shari.

I thought at the time, it had to be a fair size so I wound up the drag tension on the clutch. This seemed to really irritate whatever we had caught, because it responded by stripping off another 100 ft of line.

Over the next hour I tentatively wound the fish back to the boat, needless to say by this time I had lost my audience as total boredom had set in just when it was about to get interesting.

As our catch got closer it was apparent we had caught our first deep sea Tuna weighing in at about 60 lbs. It did not like the look of us or our boat, that at the time was sailing along very nicely on a beam reach at just over 6 knots with no intention of stopping or slowing down.

What ensued thereafter would have made the Keystone cops look like a well polished unit!!! 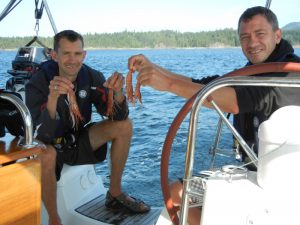 My attempt to gaff the fish resulted in it swimming and thrashing so wildly that it managed to wrap up our Walker log line around itself before then colliding with the Hydrovane and jamming the gear. This had us going from a pleasant broad reach to a wild ride dead down wind which was followed by a crashing full standing gybe of the mains’l. The boat was now fed up with my antics and slew to a stop locked in a hove to position straining awkwardly against the gybe preventer. The lack of motion and weird heeling angle brought out my fan base just in time to see me cut the trace and log line in order to free up the very tangled steering vane and speed log.

It took all of 2 hours before we were back to normal. The fishing line (what was left of it!) was wound up for the day and we quietly went back onto our course with thankfully no damage other than to my pride. Leaving fresh fish for dinner for another day.’